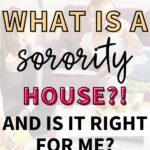 Sororities and fraternities have become fairly synonymous with many people’s imaginations surrounding the American college experience.

They are associated with traditions, parties, and living in large, old houses. But the details surrounding those living arrangements seem mysterious.

A sorority house is a large home that serves as a communal living space for members of a college sorority. The houses also generally function as venues for social gatherings, charity fundraisers, and sorority chapter meetings.

Simply, the sorority house is the place where members of a sorority could choose to live during their college years. And in some cases, sorority women are required to live, for some duration of time, in their sorority house as part of their membership requirements.

In this blog post, we will discuss the origin and history of sorority houses and if living in your sorority’s house is right for you!

*This post may contain affiliate links. Purchasing a product or service through an affiliate will earn me a small commission at no additional cost to you. Please read our Disclaimer Policy for more information about the use of affiliate links on this site.

What are the origins of the sorority house?

These early frat houses were more like lodges in the woods for young men to gather and bond. It didn’t take too long for these lodges to evolve into communal living spaces for the young men.

At the time these were simply dubbed “women’s fraternities.”

In the 1880s, it became common for these “women’s fraternities” to rent large houses for communal living.

It wasn’t considered proper for young women to all be living together unsupervised, so they would also host a chaperone in the home.

These communal housing arrangements were welcomed by colleges with few options for student housing at the time.

What was the first sorority house?

The oldest known sorority is a hotly debated matter.

Many claim to be the first and the trouble is that many of their claims are likely accurate to one degree or another.

It gets confusing because the sorority wasn’t as clearly defined in these earlier days as it is now. So many societies, organizations, and clubs evolved into modern sororities and thus the confusion over the “first.”

However, we do know that the first official sorority house to be owned by an operating “women’s fraternity” was the Alpha Phi house at Syracuse University.

Alpha Phi is credited with a number of firsts for sororities. Members lived in the house until 1902, but it was deemed too small to keep up with the membership. The house was sold to the university and converted into dormitories.

Ever since that first house at Syracuse University, sororities have expanded and evolved opening up chapters across the country.

The idea of a sorority house faced regional challenges as some more conservative spaces deemed them “improper.”

As with more things, women have had to fight long and hard for their right to this space.

What is it like to live in a sorority house?

The rules pertaining to who lives in a sorority house are different for each chapter on each campus.

Primarily it will depend on the number of members in the sorority and the amount of space available in the house.

Some sororities will have space for all their members, others may have small houses with space only available to officers.

For example, at the University of Alabama, their greek houses can have 16-80 members live there, but it is dependent on the greek organization and how they manage their housing policies.

You should consider whether or not you want to live in a sorority house when you choose to rush.

Some sororities may require that you live there, while others may not even have it as an available option.

Consider asking these questions during recruitment:

Your experience living in a sorority house is going to entirely depend on the answer to all those questions above.

What are the pros and cons to living in a sorority house?

Where you choose to live for your college years is a highly personal decision and one that you should spend some time thinking about.

Every living situation will have its fair share of pros and cons and it is up to you to decide what exactly is worth it.

The pros of living in a sorority house

The pros of living in a sorority house will be flexible depending on the particular chapter house.

These are a few of the things we consider to be pros across the board.

Another perk that is harder to quantify is just the memories you will make during your time in the sorority house!

Whether they be happy, frustrating, crazy, weird, or all of the above you will remember them for the rest of your life!

The cons of living in a sorority house

Cohabitating with that many other young people can’t be perfect all the time and will definitely have its fair share of headaches.

Some of the pros above might actually be cons depending on who you are.

Personally, I have never lived full-time in a sorority house. The university I went to did not have Greek Housing for sororities due to local legislation, but I know I personally I would not have fared well living in a Sorority House being an introvert.

Here’s some other unglamorous realities of living in a sorority house:

Don’t forget the distractions, too. With this many people in one house, there is always something to do, which can make it tough to buckle down and focus on your studies.

How much does it cost to live in a sorority house?

While there is no standard figure or cost of living in a sorority house, generally speaking, it isn’t cheap.

However, several studies suggest that living in a sorority house is cheaper than living in a dormitory. Rent per semester can vary widely from as low as $1,500 all the way up to $8,000.

You should be mindful and figure out if the cost of rent includes food or a meal plan, cleaning services, and any membership fees.

And sometimes these may be rolled into your rent. You’ll need to crunch the numbers at your own university comparing dorms and chapter houses.

Often the savings comes from the inclusive meal plan, which is hard to pass up as a hungry college girl!

Should you live in a sorority house?

Many alumni reflect extremely fondly on their time living in sorority houses.

They found the experience to be extremely formative and wouldn’t trade it for anything. However, others have the exact opposite feelings about living in a sorority house and there can be a lot of hate directed at sororities.

Ultimately, the choice is yours to make.

Carefully consider the pros and cons of sororities on your campus and if it feels right for you, then you may find yourself among the many who have fallen in love with their sisterhood.

Juliet Meiling graduated in 2018 with her Bachelor of Science in Psychology with a minor in Statistics. She was a Sister of the Gamma Phi Beta sorority from 2016-2018 and now currently works as a Graduate Teaching Assistant while attending graduate school full-time to earn her Masters of Science in Applied Statistics. To learn more click here. 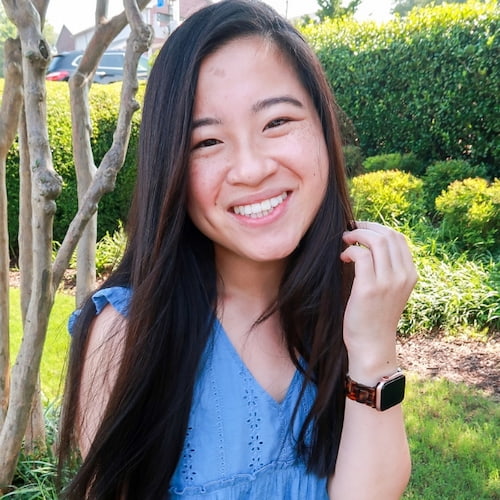 We, julietmeiling.com, are a participant in the Amazon Services LLC Associates Program, which is an affiliate advertising program designed to provide a means for sites to earn advertising fees by advertising and linking to Amazon.com. As an Amazon Associate I earn from qualifying purchases.